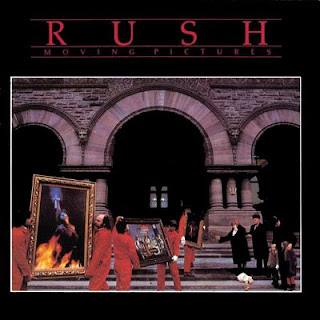 To win a copy of Moving Pictures on 180g vinyl, simply answer the question below:

Rush has two albums listed in '1001 Albums You Must Hear Before You Die'. Moving Pictures is one. What is the other?

Rush’s eighth studio album, released in February, 1981, also turned out to be their biggest-selling in the U.S., rising to #3 on the Billboard charts (and #1 in Canada), as one of the first discs to receive the RIAA’s first-ever multi-platinum designation, scoring 4 million sales to date in the U.S. on the strength of classics like “Limelight,” “Tom Sawyer” and “Vital Signs.”

Probably one of the greatest hard rock albums of all time and one of Rush's best, Moving Pictures couldn't be a better follow up to Permanent Waves.
All seven tracks on the album are classics, which makes it difficult for us to choose our favourites, whether it's the classic rock staple 'Tom Sawyer', the song with Alex Lifeson's favourite solo 'Limelight' that discusses the pros and cons of stardom, or the highly-praised (and rightly so!) instrumental 'YYZ'.
http://thesoundofvinyl.com/*/*/Moving-Pictures/42120000000