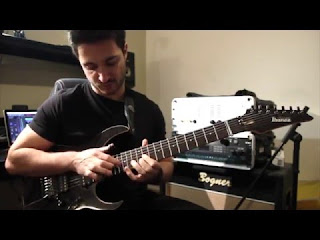 "Hello, my name is Ignazio Di Salvo. I'm a professional guitar player and composer from Italy.
I picked up the guitar at the age of nine, studying classical guitar at the Conservatory for five years.
After the high school I moved to Milan in order to take a Bachelor in General Management and I've also obtained the degree at the Milan International Music Academy after five years of studying. I've also obtained a Jazz Master's Degree at the Conservatory of Alessandria. After receiving many scholarships as Jazz player (Berklee Umbria Jazz, Nuoro Jazz and many others), I won the first price ad the Ziua Chitarelor International Competition, with great players in the jury like Jennifer Batten, Andreas Oberg, Michael Lee Firkins and Stu Hamm. I've been also one of the 12 finalists of the Guitar Idol III Competition in London and then I joined the Jamtrackcentral Artists Rooster among the best players from all over the world.
In Milan I've also founded a music school called "Modern Music Institute of Milan" and I've had the opportunity to open the concerts of Guthrie Govan and Reb Beach with my band. I've been the guitar player of the spot Peugeot 208 GTI broadcasted in almost all over the world also playing an Ibanez guitar.
In 2013 I moved to Belgium to continue my career and my studies. I'm actually finishing a Master in Music Pedagogy at the Conservatoire Royal de Bruxelles and I became in few time one of the most requested guitar players and guitar teachers of the Belgium area, working also as session man for different bands and projects in many styles.
After publishing my first instrumental solo album "A Gift to the world" which received great reviews from many magazines and on the web, I'm actually writing a new album composed by metal songs for a new band. I've also had the opportunity to perform in the best jazz clubs of the Belgium area with my Fusion band "La Grooverie Quartet" almost entirely with original music written by me. "