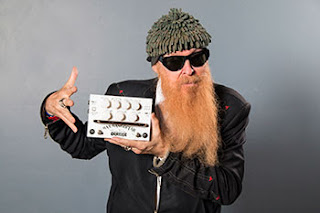 Orange Amplification are delighted to welcome ZZ Top’s Billy Gibbons as an Ambassador for the Orange Bax Bangeetar pedal. He has recently discovered Orange’s new British made guitar and bass Pre-EQ pedal and said ‘Lovin’ this thing!! It’s revealed itself as a true tone chameleon ….. super versatile.’

Billy Gibbons is best known as the guitarist and lead singer with the American Rock band ZZ Top, which he formed in the late sixties with bassist Dusty Hill and drummer Frank Beard. They remain one of the very few major recording groups to have retained the same line up for more than 45 years. ZZ Top were inducted into the Rock and Roll Hall of Fame in 2004 with four of their albums certified gold, three as platinum and two as multi-platinum. Their songs have become classic and hard rock staples.

As a guitarist, Billy Gibbons is a respected blues scholar with an instinctive touch. His legendary mastery of his instrument is something many guitarists spend a lifetime achieving. Regarded as one of rock’s leading tone-meisters, Billy honed signature sound, drawn from a deep knowledge of blues / rock traditions, is full of catchy, meaty riffs and sublime solos. He is not known for using pedals and effects so Orange is particularly proud that he has chosen to use the Bax Bangeetar, both on stage and in the studio.

The Orange Bax Bangeetar was the company's first foray into the pedal market in more than forty years. Handmade in the Orange Custom Shop, England, the pedal feels and behaves like an Orange amp, delivering natural break-up, without any hint of stifling compression. The Bax Bangeetar has a huge dynamic range producing classic Orange crunch and vintage overdrive at moderate gain settings, increase the drive levels to yield a wealth of outrageous modern tones with insane amounts of distortion on offer. It has a unique flexible gain structure, giving it extensive tweaking capabilities. With the Baxandall EQ and full parametric mid controls allowing complete command over a broad frequency range its response is almost infinite.

Check out ‘a great pedal that nails the Orange sound’ (Total Guitar) at https://orangeamps.com/bax-bangeetar/ where you can hear designer Adrian Emsley putting it through its paces.
Billy Gibbons