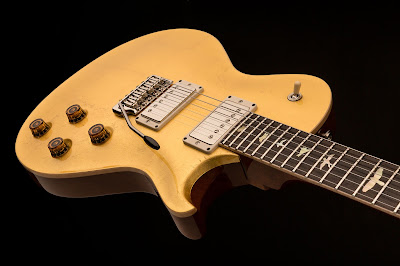 (STEVENSVILLE, MD) September 26, 2016 – PRS Guitars Private Stock program is celebrating their 20th Anniversary this year with the return to the platform that started it all: Guitars of the Month. Each month in 2016, the Private Stock team will deliver a unique design in limited numbers, highlighting the detailed craftsmanship and exquisite materials that define Private Stock.

Inspired by a special instrument made for Carlos Santana, the Private Stock September Guitar of the Month is the 24-Fret McCarty Singlecut Trem. The classic Santana/PRS Combination of a 24.5” scale length, 24 frets, and a tremolo bridge live on here, and just like Santana’s personal axe, the September Guitar of the Month features a “custom wound” 58/15 treble pickup, which is wound a little hotter for a bit more power in the bridge position. 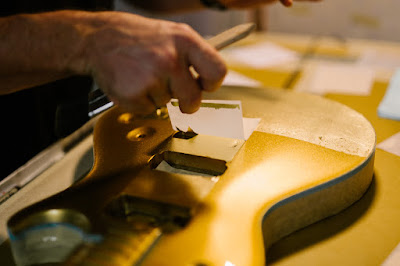 “The inspiration behind the golf leaf single cut came from a guitar Carlos ordered. I wasn’t sure why he was ordering a singlecut, but as soon as he received the guitar he sent me flowers, so I assumed he liked it!” stated PRS Private Stock Director, Paul Miles. “Not long after, I saw him playing it during the intro to the Super Bowl and thought if he was using it for that level of publicity then he loves it. It’s a unique take on a vintage style instrument…gold top singlecut with amped up pickups.” 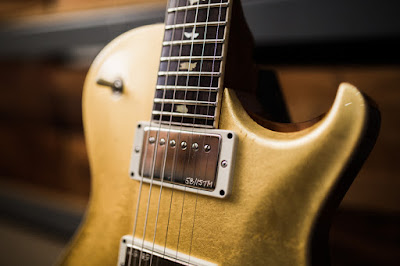 Other specifications include a figured mahogany neck, Madagascar rosewood fingerboard and headstock veneer with curly maple binding, and gold mother of pearl PRS bird inlays. A gold mother of pearl “September” engraved banner, “OM” symbol, and Private Stock eagle sit elegantly in the headstock to commemorate the 20th Anniversary of Private Stock and the Guitar of the Month program. The original Guitars of the Month were cased between December 1994 and March 1996. They provided the opportunity to experiment with new ideas and led directly to the creation of the Private Stock program, with the first “official” Private Stock instrument casing on April 19, 1996. 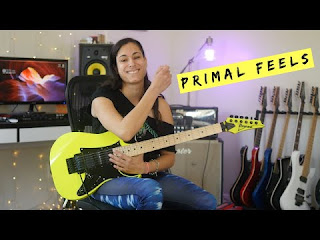