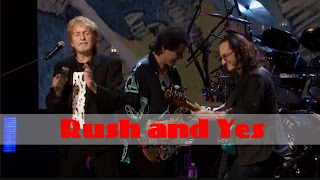 Anderson last performed as a member of Yes in 2004 and officially left the group in 2008 after a fallout with his band mates. “We’re definitely connected,” said Anderson. “It’s a family. There’s always animosity. People that you love you don’t always like, and there’s always going to be that. But when you’re celebrating who you truly are, you forget about all that and just get on with meeting each other and seeing each other, and it’s just one of those things. It’s not a problem; We’ll just get together and have fun. Music is a healing force on every level.”

Along with Yes, Pearl Jam, Journey, Joan Baez, Electric Light Orchestra and Tupac Shakur were inducted into the Rock And Roll Hall Of Fame. The 2017 ceremony also includes Nile Rodgers of Chic receiving the Award For Musical Excellence.

Rollingstone.com review: Rush's Alex Lifeson and Geddy Lee have been lifelong fans of Yes, and at Yes' Rock and Roll Hall of Fame induction, the pair not only got to pay tribute to the band that inspired them to pursue music but also got to share the stage with them for the first time.

"As I said during my speech, I was turned on to them through their second album Time and a Word," Lee tells Rolling Stone after exiting the stage. "I've been a huge fan ever since, just an over-the-top fan of them for years."

As a bassist, Lee was thrilled to be able to perform "Roundabout," a song he considers to be "one of the great bass songs ever written, in the history of recorded music." After already agreeing to induct Yes, Lee had been asked to join them for a performance by the late and influential bass player Chris Squire's widow and the remaining members of the band. "Seeing as I was going to be here anyway, why not?"

As Lee said during his induction speech: "It's not overstating things to say it changed the way I played and listened to music forever. So here we are, decades later, and the music of Yes is still echoing down through the years, showing me that music truly is a continuum."

Lifeson shared the profound influence of the band on his life during the induction speech as well. "Yes were my gateway band in so many ways," the guitarist says. "There's nothing so fleeting yet enduring about the way music feels when you're 17 years old."

The Rock Hall audience got another treat in the form of keyboardist Rick Wakeman's uproarious acceptance speech. Though Lifeson couldn't hear much of it over the laughs, he appreciated the snippets he caught. "He's a very, very funny guy," he says. "He's got a great style and sense of humor."