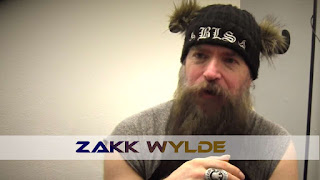 LABEL SOCIETY live mayhem… ZAKK WYLDE in his own dressing room takes time to relax chatting with yours truly BARBARA CASERTA for LINEA ROCK about 20 years of BLS… already! But he’s aiming to catch the Rolling Stones in the next 30 years, no time to loose in celebrating short anniversaries! ☺ We discussed the new album “Grimmest Hits”…not to be confused with a Greatest Hits, for God’s sake! This is the 10th album by his band, but did it reach the Top 3 of his own production? How they recorded it? How they composed it while recording? Are Led Zeppelin, Black Sabbath and The Allman Brothers still a major influence? He mentions also other names, and some are quite surprising... And what about the dark mood of its cover artwork? How the line up changes work in BLS family (nobody was ever fired!) and how balance & dynamics move in composing after every new entry?… And of course we talked about this extensive 2018 tour… which will not end with BLS commitments for Mr Wylde! Ok, well, I could not resist the temptation to get anticipations on next summer Ozzy’s Farewell Tour, elaborating on this matter on how his collaboration with the Osbournes influenced him managing his solo project. And has BLS been his artistic escape thru the years no matter the pressure of being solo? Or is there more pressure in working with a living legend like Oz when you’re only nineteen? Having such a distinctive guitar style and sound like Zakk does, it can be a double edged sword, year after year, because of the audience expectations? And in Ozzy’s music family, between all the axeman from different eras - Randy Rhoads, Jake E Lee, Joe Holmes, Gus G, some in his same role before he came into the picture, some after - which one does he feel closer in the spirit and attitude? And surprisingly, what about Al Di Meola being one of his favorite guitar heroes? And how does he imagine himself in another 20 years? His point of view is shocking but very very clear…
Enjoy & Share!
Subscribe for updates
Linea Rock - Radio Lombardia - 100.3 FM From 8 PM to 10 PM
Live streaming http://www.radiolombardia.it/
Facebook: https://www.facebook.com/linearock