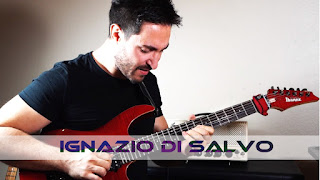 I love to study every little nuance of human voice and translate it on guitar. This is the time for "While my guitar gently weeps", a song originally composed by George Harrison and the Beatles and revisited by Toto. I love this song, especially the Toto version has got a lot of passion and Steve Lukather's solos and vocals are just amazing. The song conveys his dismay at the world's unrealised potential for universal love, which he refers to as "the love there that's sleeping" .

On release, the song received praise from several music critics, and it has since been recognised as an example of Harrison's continued maturity as a songwriter beside his Beatles bandmates John Lennon and Paul McCartney. Rolling Stone ranked "While My Guitar Gently Weeps" 136th on its list of "The 500 Greatest Songs of All Time",[5] seventh on the "100 Greatest Guitar Songs of All Time",[6] and at number 10 on its list of "The Beatles 100 Greatest Songs".[7][8] Clapton's performance was ranked 42nd in Guitar World's 2008 list of the "100 Greatest Guitar Solos".[9] In 2011 it was voted the sixth best collaboration of all time in a Rolling Stone readers poll.[10] Harrison and Clapton often performed the song together live, during which they shared the lead guitar role over the closing section. Live versions featuring the pair were included on the Concert for Bangladesh album in 1971 and Live in Japan in 1992. Backed by a band that included McCartney and Ringo Starr, Clapton performed the song at the Concert for George in November 2002, a year after Harrison's death.
Here's my guitar version. I hope you'll like it. Don't forget to share and subscribe to my channel, leave a like if you dig :)

ALL MY LESSONS AND WORKS
https://www.patreon.com/ignaziodisalvo