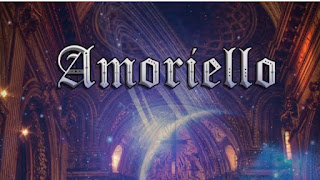 The second single from the AMORIELLO release from H42 Records features former members Yngwie Malmsteen’s Rising Force, Dokken, Impellitteri, and Cacophony. Holy Man, The Devil’s Hand (featuring Mark Boals) spotlights the singer from Trilogy, the classic Yngwie release. Mark Boals lays down an epic 24 track vocal choir delivered with conviction while Cacophony (Becker/Friedman) live drummer Kenny Stavropoulos brings the power to this up tempo modern neoclassical rocker. Impelliterri bassist James Amelio Pulli and ex-Yngwie keysman Michael Troy provide excellent work on the track. AMORIELLO is the project of guitarist and lyricist Thomas Amoriello and has gathered the attention from many of Europe’s premier metal magazines. On his first release from H42 Records, AMORIELLO was hailed from Rock Hard Magazine as virtuosic, stating that friends of Malmsteen, Stevie Ray Vaughan and Jeff Beck will get their money’s worth and from The Legacy-The Voice From The Dark Side stated that AMORIELLO may actually be at the front to even make the genre palatable to a younger generation. Lords of Metal says "...we hear the voice of Mark Boals on the opener of the album, 'Holy Man, The Devil's Hand'. Boals of course was the man who in 1986 was singer on the classic Yngwie album 'Trilogy'. Certainly nothing new under the sun there. Which does not mean that it does not sound great: like Malmsteen in his best days." Visit thomasamoriello.com for the latest