Toki, Yoshi: Aldious to Make US Debut at NAMM SHOW 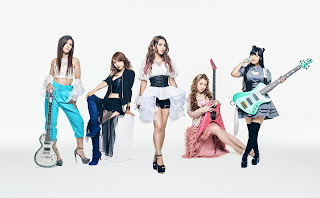 Aldious https://www.namm.org/thenammshow/2020/events/aldious
Aldious (Japanese: アルディアス Hepburn: Arudiasu) is a Japanese all-female power metal band from Osaka, formed in 2008 by guitarist Yoshi and vocalist Rami. After a few member changes, they released their debut EP Dear Slave the following year and soon after formed their own record label, Bright Star Records. Their first album Deep Exceed (2010) reached the top 15 on the Oricon chart, as did their second Determination (2011). Rami was leaving the group in June 2012 and new vocalist Re:NO joined Aldious just one month later. They produced their third album District Zero in 2013 and it became their highest-charting release to date, reaching number 7.
and new Drummer Marina joined.their fifth Radiant A was released in December 2015. The latter was their first album on the VAA (Village Again Association) record label and their first released in Europe. After one more album, Unlimited Diffusion (2017), Re:NO left the band at the end of 2018 and was replaced by R!N in August 2019. Aldious have been labelled pioneers of the Girls Metal Band Boom that began in Japan in the 2010s.