Eric Sempe: a synopsis in fusion

News:
24-07-2008:
This post is dedicated to Priscilla, for reminding me to post just how great Eric Sempe is!


Background:
Born on the 9 November 1962, Eric Sempe began playing Rock guitar at the age of 12 before moving on to Jazz, Ethno-Jazz and Experimental Music. He has participated in many recordings covering all these styles. He holds a first-class award from the Nice Conservatory, and a National Diploma as Jazz Professor. He has also played double-bass since 1991.

In 1988 Eric became a founding member of the group "SYNOP-SIS" with whom he has performed at many international festivals and recorded four albums, the last of which features David Sanborn as special guest. You can buy Synopsis CD online 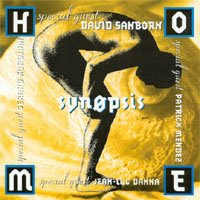