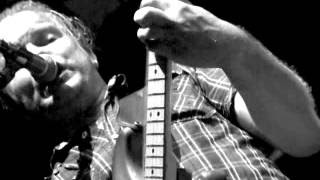 Vincent Lyons: Gutsy, emotional guitar solo by Bas Paardekoper and band, when they performed to a delighted audience, at the Gebouw-T venue in Bergen op Zoom, The Netherlands, on Friday, August 31st, 2012.

Extract from Bas's website:
Since age eleven, fed by records, cassette tapes, video's and not least by the musical environment of the Paardekooper family, Bas mastered the basics of blues and rock guitar. Soon his feeling for the instrument and his pleasure in playing, made him well-known locally, and soon, he performed on stage with fellow musicians. When he was fifteen, "Living Blues" legend Ted Oberg heard him play and decided to take Bas under his musical wings for a time to develop his blues-play. Since then, Bas has played with Blue Illusions, El Diablo, Tjeez Ramble and React. Bas Paardekooper and the Blew Crue made their first official appearance in 2007, although most members of the band had already been playing together in different settings.

Being inspired by Steve Ray Vaughan, Walter Trout and Jimi Hendrix their style can be best described as American Blues-Rock. The repertoire is heavy at times, but contains ballads as well. All songs are self composed, forming a perfect basis for the spectacular and surprising guitar-sound of Bas Paardekooper.