George Lynch: two thirds of Dokken = Slave to the Empire 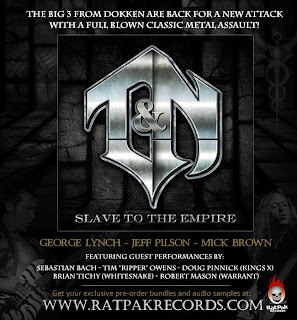 T&N reunites George Lynch, Jeff Pilson and “Wild” Mick Brown – aka “The Big Three” from Dokken - for this brand new 12 song disk that will surely be referred to as a classic in years to come! Returning to their roots, “Slave to the Empire” offers eight new original songs and four re-recorded classic Dokken songs that feature sensational vocal performances by Tim “Ripper” Owens, Doug Pinnick (Kings X), Sebastian Bach, and Robert Owens (Warrant). Add to the mix the hard hitting, multi-talented drumming of Brian Tichy and you’ve got yourself a major dose of awesome! This 12 song release is progressive, it's heavy, it’s dark, it’s bluesy, and each player’s performance is absolutely stellar. “Slave to the Empire” captures the spirit and magic from the classic metal genre, and is truly a work of art that will not disappoint! Official worldwide release date is set for October 31, 2012.