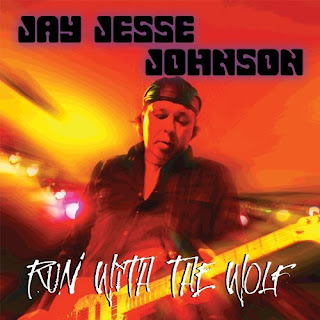 Blues fans and guitar-oriented music lovers are always looking for a CD that cooks from top to bottom.

Jay Jesse Johnson (JJJ) was born in rural Indiana and started playing guitar at the age of ten. Influenced by American blues and rock n' roll greats. Johnson has worked in recording studios from Nashville to New York City and has been blowing guitar lovers away in venues throughout North America for over 30 years, during which time Johnson has shared the stage with Aerosmith, Johnny Winter, Robin Trower, Rick Derringer, Black Sabbath, Pat Travers, Judas Priest, and Jefferson Starship, to name a few.

"Run With The Wolf" is Jay Jesse Johnson's forth solo record. His prior releases "Play That Damn Guitar" (2009), "I've Got An Ax To Grind" (2008), and "Strange Imagination" (2006) were released on the Grooveyard records label, known for recording blues rock guitarists of extraordinary ability. These exceptional CD's have helped Johnson to gather a following of faithful supporters.

Many Fans of Robin Trower, Pat Travers, and Gary Moore should appreciate Johnson's impressive command of the rock blues guitar lexicon as well as his soulful classic voice, which are a rare combination.