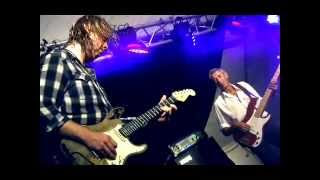 Classy finale by Marcel Scherpenzeel and Wolfpin, when the band played at the Oosterhout Blues festival on Friday September 7th, 2012. The show was provisionally the last gig in the current line up, as Marcel is now committed to playing with international group 'Band of Friends', performing together with Gerry McEvoy and Ted Mc Kenna, musicians from the original Rory Gallagher band line up.

From the Wolfpin website:
Marcel Scherpenzeel was born in Amsterdam. He started to play drums when he was 10 years old. When he was 12, Marcel got a guitar from his older brother, and from that point Marcel takes off. He listened to a lot of great records his Dad had, like John Lee Hooker, The Fabulous Thunderbirds, Rory Gallagher, Jimi Hendrix and many others. When he was 21 years old he started singing and messing around with rock, texas-blues, pop, soul and rock and roll. Marcel has played with: Gerry McAvoy & Brendan O'neill (Rory Gallagher Band - IE) Dave Gonzales (The Paladins - USA), Ron Hacker (USA), Tineke Schoenmaker (NL), The Juke Joints (NL), The Marble Tones (NL), The Hoax (UK) and more. Marcel performed on big festivals like: Jimi Hendrix Revival Festival (Germany), Enniscorthy Blues Festival (Ireland), Open Air Am Bergen (Germany), Harley Davidson Super Rally (Belgium), Paaspop (NL), Bospop (NL) and more. WOLFPIN can also be booked as a Rory Gallagher tribute.

About Band of Friends: The Band Of Friends is not a tribute to Rory Gallagher, more of a celebration of his life and music. Rory's music reached a massive audience, covering all parts of the globe and producing some of the greatest rock/blues albums of the 60's, 70's and the 80's. Gerry McAvoy's Band Of Friends is the closest lineup to the original band. Gerry McAvoy played bass guitar with Rory for 20 years; from 1971 to 1991 and Ted McKenna (drums) played with Rory from 1977 to 1981. The lineup is completed with Marcel Scherpenzeel (guitar) who Gerry is quoted as saying 'This is the closest guitarist to Rory you will ever hear'; fine praise indeed.