Robert Fripp: quit music due to unauthorised and unaccounted works under his name 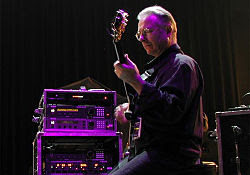 The King Crimson mainman has been embroiled in a rights fight with the giant label for five years, leading to his abandonment of music-making, with no certainty he’ll return... believes it’s led to the release of unauthorised and unaccounted works under his name.

He cites the example of rapper Kanye West’s single Power, based on Crimson’s classic track 21st Century Schizoid Man – which had been heard over a million times on YouTube before he was even asked whether the sample could be used.