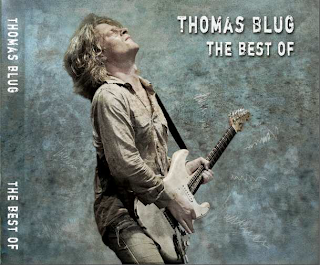 Thomas Blug, in conjunction with Stunted Records ( digital ), is proud to present a double CD of
top notch instrumental guitar music, compiled and remastered from the original recordings spanning the past decade, this new collection is available now and showcases Thomas’ development over the course of 4 studio albums and two live albums / DVDs.

Featuring 25 tracks from his back catalogue, with a running time of 160 minutes, on CD1 we
find a selection of 12 songs from the studio albums “The Beauty of Simplicity“, “Electric
Gallery“, “21st Century Guitar“ and “Soul & Pepper“, plus 2 bonus unreleased live tracks.
CD2 is a remastered edit of the legendary "Guitar From the Heart" concert filmed in Raalte.
Thomas Blugs strat sound touches your heart like no other. In 1997 he was awarded "best
German rock+pop guitarist" and in 2004 he became “Stratking” of Europe for Fender.

With a growing international reputation as one of the finest Strat players around, this collection
closes one part of Thomas Blugs emotional guitar journey and paves the way for the next stage.
Available both physically on CD and for digital download via Stunted Records digital
agreements this is a “must have” collection for Thomas Blug fans and guitar fans alike.