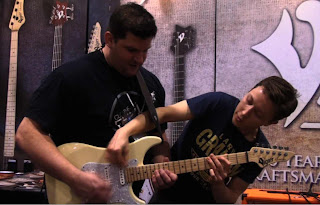 Dudley Ross: Dudley started the guitar at the relatively late age of sixteen. Inspired by players such as Jimi Hendrix, Shawn Lane, Mike Stern, Pat Metheny, Scott Henderson & George Benson, Dudley found a passion for many different genres, which was reflected in his playing from an early stage.

Dudley has toured with bands, theatre shows and as a solo artist around the world He is currently performing with Cut The Funk, Sizen, The Blues Bandits & and the Noel McCalla Band as well being a busy a dep musician for bands/shows. He has shared the stage as well as many recordings with many great acts/artists such as Pino Palladino, Geno Washington, Roger Glover (Deep Purple) Shawn Lane, Bumblefoot, Guthrie Govan, Dave Kilminster (Roger Waters), The James Taylor Quartet, Paul Booth (Eric Clapton), Jon Noyce (Jethro Tull, Gary Moore) & Matt Schofield to name a few.

In 2007 he signed an endorsement deal with Vigier Guitars, which gave him to opportunity to travel around the world performing at shop clinics and trade shows.

In 2011 Dudley was asked to perform at the Royal Festival Hall as a guest at the Young Guitarist and Guitarist of the year as well as judge the competition alongside Pete Callard and Neville Marten.

Dudley's solo album 'The Note That Told A Thousand Tales' is available on iTunes.

Dudley is proud to endorse Vigier Guitars, Voodoo Labs & LINE6 products.
Joe Sam: Playing music since the age of two, Joe started on drums and at the age of ten appeared on the BBC children's show "Why Don't You" with his band "Blue Memphis". At twenty-two, Joe beat hundreds of young bass players from across the world to gain a full scholarship to London's Institute of Contemporary Music Performance (ICMP).