March 08, 2013
IK Multimedia Updates SampleTank App for iPhone 5
User interface enhanced and polyphony increased
March 7, 2013 - IK Multimedia, a leader in mobile music-creation apps and accessories for iOS - is proud to announce the release ofSampleTank 1.4, the latest version of its professional-quality sound-and-groove-module app for iPhone, iPad and iPod touch. The app is now fully optimised to support the larger screen of both iPhone 5 and the new iPod touch while providing eye-catching graphics that showcase amazingly on the Retina display. 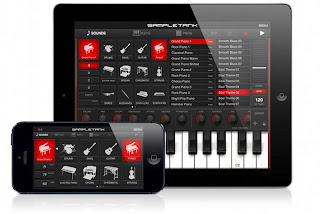 SampleTank now also sports increased polyphony (the number of simultaneous notes that can be played). Up to 64 simultaneous voices are now available, and this expanded note capacity gives users even more freedom to produce complex, professional-calibre arrangements in SampleTank's 4-track recorder, right on their iPhone, iPad or iPod touch. Lots in the TankSampleTank comes loaded with hundreds of world-class sample-based sounds and patterns, giving users a broad sonic palette for producing professional-sounding tracks and beats, or for use as a sound module for live performance. SampleTank features 16 instrument categories and includes over 500 sounds, from drums to pianos to basses to synths to guitars and many more. Users can customize the sounds through editable parameters such as volume, attack, and filter; and with insert effects and a master reverb. Thanks to a newly streamlined user interface, navigation through Sample Tank's powerful features is now even easier and faster. Get More for LessAdditional instruments, patterns and grooves are available in convenient instrument-specific expansion sound packs, making it easy for users to add the specific sound types they need. IK offers two great options for controlling SampleTank externally: iRig KEYS is a 37-mini-key, bus-powered, ultra-portable keyboard; and iRig MIDI is an iOS MIDI interface that makes it possible to plug any external controller into an iPhone, iPad or iPod touch.Pricing and AvailabilityThe SampleTank App is available for €17.99 from the App Store on iPhone, iPad and iPod touch or atwww.AppStore.com/SampleTank. The app includes over 130 sounds and 1000 MIDI patterns that can further be expanded via In-App Purchase. The update is free for existing users.A free version of the app, SampleTank FREE, is also available, which includes 20 instrument sounds and can be expanded with the optional sound packs via In-App Purchase.www.sampletank.com/ioswww.ikmultimedia.com/irigkeyswww.ikmultimedia.com/irigmidi
news