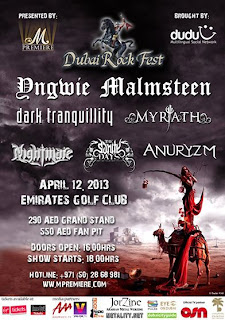 Rock music is the biggest and most wanted genre with the largest numbers of followers around the globe and it creates an invisible bond when musical acts from different countries and cultures get united to play in one place sharing the same stage. Emirates Golf Club well known for its picturesque scenery and located in the heart of New Dubai right by the Sheikh Zayed Road will host Dubai Rock Fest 2013. It is a perfect spot to host Dubai Rock Fest 2013 as it is located only 5 minutes away from Nakheel metro station with great facilities on open air area surrounded by amazing city view.