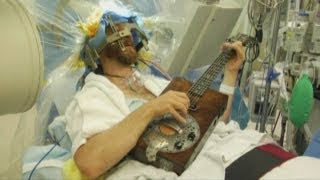 A patient undergoing brain surgery at University of California is filmed playing guitar during the procedure. Brad Carter, a 39-year-old actor and musician in Los Angeles, was undergoing a procedure to implant a brain pacemaker to help treat essential tremors.

The procedure was conducted on May 23 and with Carter's help was turned into a public event.

The medical team posted live updates on Twitter during surgery as well as videos of Carter, who was awake during the procedure, testing his motor skills including playing guitar. Report by Andrea Lilly.