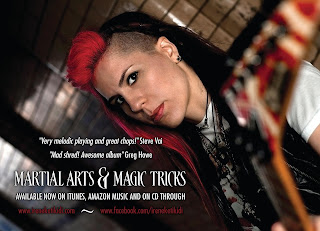 in the comfort of your home,www.aiiradio.net

Aiiradio.net proudly presents a live interview with Greek-born guitar heroine Irene Ketikidi. On Sunday June 2nd she will be a special guest @ The Sweet Hell House with DJ Morgana to present her first guitar instrumental album "Martial Arts & Magic Tricks" (released in March 2013) and to talk about her amazing career as solo guitarist and teacher.
Irene started playing electric guitar at 15. In 2007, she attended the prestigious Guitar Institute (ICMP) in London, where she graduated in 2009 with a Bmus degree and a level 6 Licentiate in teaching music. Since then, Irene has worked with session members of The Darkness, Guy Chambers, We Will Rock You and Thriller Live West End shows. She has played some of the biggest stages in Europe and the UK, including supporting acts to ZZ Top and at the London Steve Vai Guitar Nation masterclass. Most recently, she was the lead guitarist and guest actor at West End’s “Julius Caesar” play at the Donmar Warehouse.
As a session player, during 2011, she toured the UK with her melodic metal band GraVil and recorded guitars for their album "Thoughts of the Rising Sun". Irene has also contributed tuition columns to the Guitar Website Live4Guitar.com and was a guest instructor and course writer at the 2010 and 2011 International Guitar Foundation courses in London.

“Irene has great tone, feel and technique, and the song she played wasn’t just an excuse for look-how-fast-I-can-play widdling but stood up as a composition too.” - Neil Murray