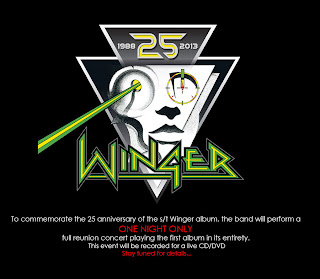 This August will mark the 25th anniversary of Winger's self titled debut album, to commemorate this milestone the band will perform & record the first Winger album live in its entirety.

In addition to the current line up of Kip Winger, Reb Beach, Rod Morgenstein & John Roth, the band will also be joined by original keyboardist Paul Taylor for this show.

A limited amount of VIP Meet & Greet passes and full line of all new commemorative merchandise are available at in the store.

Winger is currently hard at work in the studio recording a new album.