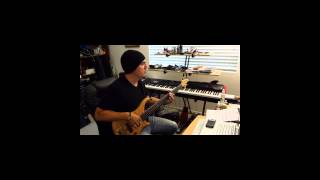 Alessandro Bertoni's new album "Keystone" will be out on Sept.9,2013. It features Brett Garsed on guitar, Ric Fierabracci on bass, Virgil Donati on drums. Produced by Derek Sherinian. Ric is featured on the whole album and this is an intro from one of the songs.

Alessandro Bertoni's first solo album will be released on Generation Prog Records September 9, 2013. The album features eight tracks written by Alessandro and recorded with an outstanding line-up of musicians: