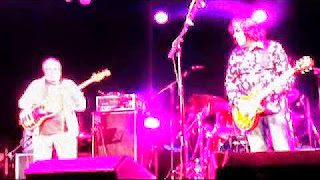 Gary Moore, Ray Russell, Mo Foster, Ralph Salmins, Jim Watson, Rupert Cobb VIBES FROM THE VINES 8TH AUGUST 2009.
An open-air Music Festival in aid of Cancer Research UK with a host of bands.THIS IS AMATEUR HANDHELDS FOOTAGE AND DOES NOT FULLY REFLECT THE CONCERT SOUND OR PERFORMANCE AND IS HERE FOR NO FINANCIAL GAIN BY ME. HOPE KINDRED SPIRITS ENJOY VIEWING THIS,
PLEASE VISIT THE LINKS FOR INFORMATION:
http://vibesfromthevines.co.uk/lineup...
http://rayrussell.co.uk/
http://www.mofoster.com/main.php
http://ralphsalmins.com/Welcome.html
http://www.jimwatson.org/
http://logictoolbox.com/
Ray Russell
A consummate professional as guitarist, composer and producer, Ray has an extraordinary capacity for both virtuosity and versatility. More than just a great session player, Ray has been a collaborator, front man, band member, arranger, composer and friend to many of the Worlds most influential musicians, bridging the chasms between different musical genres with ease. His talents span different media as well. Over four decades, Gill Evans, John Barry, Tina Turner, Phil Spector, The Ronettes, Van Morrison, Art Garfunkel, Dionne Warwick, Bryan Ferry, Jack Bruce, Cat Stevens, Phil Collins, Alex Harvey, Mark Isham, Georgie Fame, Frankie Miller are but a few of the artists and producers who have known that Ray Russell would add something special to their work. From Plain Jane, a period drama to the ITV flagship detective series A Touch of Frost, many of televisions best loved shows are uplifted by Rays music.

Ralph Salmins : Part quote from Ralph Salmins
"Interested in jazz and R&B from a young age, I became a professional musician at the age of 16 when I joined Ken Mackintosh's Band. My early influences drew me towards the great big bands and the exciting groove tradition that came out of New York in the early 1970's and by the age of 14, I was checking out Sonny Payne, Jo Jones, Philly Joe Jones, Jimmy Cobb, Art Blakey and Elvin Jones. My attraction to funk and R & B music brought strong influences from Bernard Purdie, David Garibaldi, Billy Cobham and my greatest influence, Steve Gadd. I started freelancing around London while studying classical percussion at the Guildhall School of Music and Drama where I was awarded the Philip Jones Percussion Prize for my final recital in 1986. I've has been nominated for the British Jazz Awards three times, winning the Best drummer category in 2006 and been twice ranked top ten Studio Drummer in Rhythm Magazine Readers Polls. I won the 2003 Reader's Poll Studio Category at Mike Dolbear.com and was nominated for the 2007 Ronnie Scott's Jazz Awards.

Jim Watson studied at the Leeds College of Music where he obtained a first class BA Honours degree in Jazz and Contemporary Music, studying piano with Nikki Isles. After Leeds he moved to London, studying at the Guildhall School of Music and Drama, where he gained a Post Graduate Certificate in Jazz and Studio music. Moving to London in 1996 ,