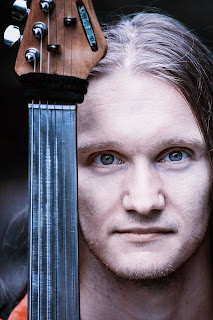 Obscura
“It gives me great pleasure to anounce that I’ve joined Obscura as their new guitar-player. Having already worked with Linus and past members Christian and Hannes in recent projects and having followed the band’s career closely since their very first tour, the transition felt completely natural. Taking over Christians duties in the band makes me feel equal parts proud and at ease, since we’ve known and respected each other for many years. I’m very much looking forward to touring the world with my fantastic new band-mates, entering the studio for a new record VERY soon and also being able to bring my playing on both fretted and fretless guitars to a wider audience through this exciting new opportunity.” – Tom “Fountainhead” Geldschläger

“Tom “Fountainhead” Geldschläger and Sebastian Lanser will add some new and fresh vibes to Obscura’s trademark sound. Adding fretless guitars and more fusion drumming will definitely influence our songwriting. I am looking forward desperately to work with this new talented group of musicians on the fourth record. At the moment we are in the middle of writing new material, rearranging previously written ideas and start preparing the upcoming liveshows in 2015. First festivals will be announced soon, worldwide touring activities follow the album release. With a new record, intense performances and a full live production we want to meet our fans & friends around the globe!” – Steffen Kummerer

Fountainhead is the alter-ego of guitar player / composer / producer Tom Geldschläger. Currently operating from his studio in berlin, germany, Tom has appeared on countless records as a guitar player, arranger, producer, mixing-engineer and sometimes keyboard player. He recorded and toured with artists like Ray Riendeau, Marco Minnemann, Jimmy Pitts, Xell, The Living among others and has been featured in various magazines around the globe, most recently “guitar plus” and “gitarre & bass”. Fountainhead is endorsed by Steinberg Software, Loxx Products, Soultool Guitars and GoodTone Pickups, from which “Fountainhead signature” guitar models and pick-up sets are available.