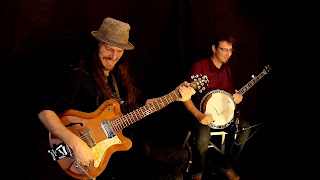 start in 2013 as music project of two friends which would like a try something not typical and play some unique music with their instrument: Electric Guitar and Banjo. This combination work well and right now after 2 years we introducing our music ideas and our Natural Fusion Project to you. Who we are ?

Richard Ciferský
is an internationally recognised banjo master from Pezinok, Slovak Republic. Richard is a two-time winner of the Slovak Bluegrass Music Association (SkBMA) “Banjo Player of the Year” award (1999/2000). As owner and producer of Velvet Music, his independent record label has produced several albums for other groups as well as three of his own solo projects, Coming Back for More (2013), Rainy Day (2008) and New Gallop (2004). From 2003 Richard travel, play and teach in USA. Till today Richard play there with Fragment band, but also joined Valerie Smith & Liberty Pike as well as other traditional bluegrass musicians and bands such as Carrie Hassler, Mountain Soul, Louisa Branscomb, and the Gold Heart Sisters.
- official endorsement: PRUCHA banjo, GHS strings, BLUECHIP picks, REUNION BLUES, BANJOLIT, ELECTRO-VOICE, L.R. BAGGS, PAIGE capos, PLANET WAVES.