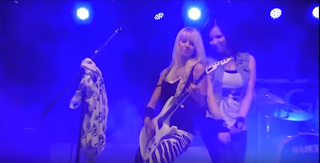 BIO:
A natural born Rocker who grew up listening to the classics of the 70’s and 80’, Claudia Gamba started playing classical guitar in 1997. She got a degree in Blues-Rock in 2006 at Lizard Academy (Italy) after her former private studies with the guitar-virtuoso Mauro Rosina, nourishing since then her wild passion for electric, loud and no-compromising sounds.

Founding member and composer for the Italian Rock ‘n’ Roll all female band Cellulite Star, www.facebook.com/cellulitestar, active since 2004 and acclaimed by the national and international press as the Italian response to seminal bands such as The Donnas, Vixen and Girlschool, she has written and recorded “Rock Girlz in Action” (2006), “Explicit Attitude” (Andromeda Relix, 2008).
She has toured intensely throughout the whole country of Italy with her band and her acoustic classic rock duo with the singer Thomas Libero, www.facebook.com/ThoandKla, delivering high voltage Rock ‘n’ Roll shows. Claudia also played for the Italian rapper J-AX performing "Brillo Ma Da Lucido" (C) 2012 Sony Music Entertainment Italy: www.youtube.com/watch?v=C1S0E-VpRrs /MTV rotation.

Her style is an energetic mixture of powerful pentatonic licks, huge sounding hard-rock riffs, Van Halen tapping and Swedish Rock ‘n’ Roll influenced phrases, all played from deep within her heart!
Yet another taste of her irreverent and ironic attitude is the brand new Cellulite Star album: “Out of the Cage” born from the synergy between Claudia and the amazing Artistic Producer Davide Moras (Elvenking-AFM / Hell in the Club-Scarlet Records), out for Valery Records in 2014 / worldwide distribution / Rock TV Italy rotation.

STAY TUNED FOR MORE DETAILS ABOUT THE ALBUM'S PROMOTIONAL TOUR!