Jesse Cook: Guitar To Be Auctioned By CharityBuzz On Behalf Of MusiCounts 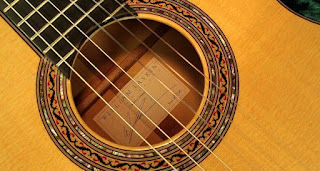 Jesse Cook Guitar To Be Auctioned By CharityBuzz On Behalf Of MusiCounts
https://www.charitybuzz.com/catalog_items/william-laskin-flamenco-guitar-2012-created-for-jesse-965800

Speaking about his guitars, legendary musician and Entertainment One Music recording artist Jesse Cook said, “Over the years, I’ve taken my music and tried to cross-pollinate it with music from different parts of the world,” explains the 50-year-old global-guitar virtuoso. “For the (2003) album Nomad, I went to Cairo and recorded with musicians there. On my (2009) record The Rumba Foundation, I went to Colombia, and worked with musicians from Cuba as well. On (1998’s) Vertigo, I went down to Lafayette, La., and recorded with Buckwheat Zydeco. For me, the question has always been: Where did you go? Where did you take your guitar?” The answer is found in his new album, the #1 Jazz and World Music album One World, and now, fans of Cook will have an opportunity to own one of these treasured instruments in CharityBuzz’s upcoming auction for a one-of-a-kind Deluxe Calton, to be held online starting December 1 and ends December 20.

This is a brand new Flamenco instrument, specifically made for Cook. Cook has played a Laskin Flamenco Negra in performance for many years. This on-going collaboration with Cook inspiring Laskin to build him another guitar. After years of dreaming about getting a Flamenco Blanca Laskin, the guitar-maker finally managed to find the time to build one. As always, his guitar was spectacular. Jesse was caught by surprise when presented with a new $18,000 Laskin guitar, and he’s now passed along the opportunity for another music-lover to enjoy it, with proceeds going to MusiCounts, Canada’s music education charity associated with The Canadian Academy of Recording Arts and Sciences (CARAS), helping to keep music alive in schools and communities across Canada.

A video of Jesse’s performance with this unique instrument can be seen on YouTube here, and a video of Jesse sharing his love for his William Laskin guitar in conversation with its builder is here


“By giving another music-lover the chance to enjoy this incredibly unique instrument, we will be providing the opportunity for thousands of children to experience the sheer joy of making music, along with the many other benefits that are proven to go hand-in-hand with music education,” Said Vanessa Thomas, Executive Director, MusiCounts. “We are extremely grateful for Jesse’s generosity as this will help us support multiple music programs with instruments that will last for many years to come.”

The guitar is set up within the normal range of CONCERT Flamenco action. It is currently at 7/64 measured at the 12 fret position. “Commonly we have flamenco players who go as low as 6/64 and rarely even lower,” says Laskin. “There is a full 6/64 of excess height at the bridge saddle so plenty of scope to lower the action if required.”

“This is an excellent opportunity to acquire a classic instrument, complete with a unique history and future, and to support an exceptionally worthy cause at the same time. It’s no overstatement that this is one of the most beautifully-made and sonically-perfect instruments in the world,” said Cook. “This is a significant instrument, and will no doubt be the prize in some guitarist’s collection.”

About MusiCounts:
MusiCounts, Canada's music education charity associated with The Canadian Academy of Recording Arts and Sciences (CARAS) and the Canadian Country Music Association (CCMA), is putting musical instruments into the hands of children who need it most. MusiCounts' mission is to ensure that children in Canada, regardless of socio-economic circumstances or cultural background, have access to music programs through their schools and communities. Since MusiCounts' establishment in 1997, nearly $8,000,000 has been awarded in support of music education in Canada. These funds have benefitted over 700 schools and communities from coast to coast, supported over 300 post-secondary music program graduates and honoured 10 extraordinary music teachers through the MusiCounts Teacher of the Year Award. For more information visitmusicounts.ca.

About Entertainment One:
Entertainment One Ltd. (LSE:ETO) is a leading international entertainment company that specializes in the acquisition, production and distribution of film and television content. The company’s comprehensive network extends around the globe including Canada, the U.S., the UK, Ireland, Spain, Benelux, France, Germany, Scandinavia, Australia, New Zealand, and South Africa. Through established Film and Television divisions, the company provides extensive expertise in film distribution, television and music production, family programming, merchandising and licensing, and digital content. Its current rights library is exploited across all media formats and includes more than 40,000 film and television titles, 4,500 hours of television programming and 45,000 music tracks.