Alberto Rigoni: Live at Teatro delle Voci": the new EP by “The Italians 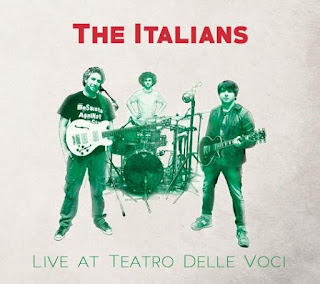 "LIVE AT TEATRO DELLE VOCI": THE NEW EP OF “THE ITALIANS”

On June 15 the launch of the first EP of the Anglo-Italian band. Online also the first live video
The Italians, rock band made in Treviso, are the perfect "Britalian" mix, merger of British rock and Italian passion, elements that stand out in all their vitality in the new EP "Live at Teatro delle Voci" recently recorded by the group and outgoing on June 15, 2016.

Four songs written by London singer-songwriter William Knight and arranged with Italian bassist Alberto Rigoni (solo artist, Vivaldi Metal Project, Kim Bingham) and young drummer Alessandro Miazzi. The result is a rough, rock sound, exquisitely natural, made of vibrations which express at best the atmosphere of the lyrics, often critical towards social stereotypes. The music becomes a series of messages, pure expression of feelings, emotions, criticism of the human component that creates the social context.

"The EP was recorded in a single breath, a day of registration full of meaning and adrenaline, also possible thanks to the professionalism of the Teatro delle Voci team (Treviso, Italy). No editing, overdubbing ... old style! We are very proud of this". This is the band's comment, which is now getting ready to introduce the songs to the audience on several live gigs. "In the summer we will have several occasions in northern Italy to play and present our work, hoping to soon return to the studio to record an entire album."

Together with the official release of the EP, the band has also launched its first video "Live in the studio", live witnessing of the making of the EP, available at the following linkhttps://www.youtube.com/watch?v=DrjtvPRenTk and on Facebook https://www.facebook.com/theitaliansband/videos/1062227927166315/