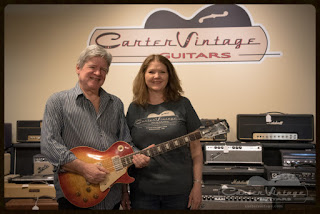 
May 13, 2016, Nashville TN... Carter Vintage Guitars has acquired the earliest example of Gibson’s iconic cherry sunburst Les Paul guitar, the model made famous by Eric Clapton, Jimmy Page, Duane Allman and numerous other influential rock guitarists.
The Les Paul Model, as it was originally called, had been introduced in 1952 with a gold finish on the top, but in 1958 Gibson began experimenting with cherry-stain finishes. After several trial runs, two guitars were shipped on May 28, 1958, to Gibson’s parent company, Chicago Musical Instrument, for approval. In Gibson’s daily shipping ledger, they were described as “LP Spec. Finish.” They featured the yellow-to-red “sunburst” that became the standard finish on the model. 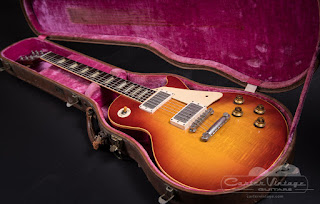 One of the guitars in the shipping entry, serial number 8 3096, has been known to Les Paul aficionados for more than a decade and is currently owned by Slash, former guitarist for the group Guns N’ Roses. The guitar that now resides at Carter Vintage is serial number 8 3087. It went to the O.K. Houck music store in Memphis, where the father of the current owner bought it in 1958 as a Christmas present for his son.
“The original owner, who still lives in Memphis, sent us photos with the serial number, 8 3087,” said Walter Carter, proprietor of Carter Vintage and former historian for Gibson Guitar Corp. “I had found an entry twenty years ago in Gibson’s shipping ledgers that I thought might be the first ’burst, and the serial number rang a bell. The owner also had snapshots of himself at age 14, taken just months after he bought it. It’s the kind of discovery that vintage guitar collectors dream about.”
This “first ’burst” has a three-piece maple top, which is different from the two-piece top that subsequent sunburst Les Pauls sported—an indication that it was intended to be a “goldtop” and was pulled off the production line for the experimental finish. 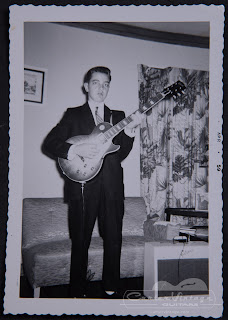 Gibson made an estimated 1,500 cherry sunburst Les Paul Standards before changing the body shape and finish color in 1961. The cherry sunburst Les Paul is one of the most highly sought vintage guitar models and has been the subject of several books.
Carter Vintage Guitars was established in Nashville in 2013 by Walter and Christie Carter and is an internationally known dealer of vintage fretted instruments.