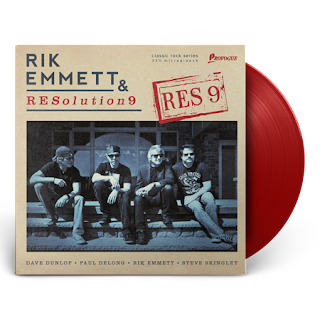 "RES9" will be released worldwide on November 11

Allied Forces! Rock & Roll Machine! Magic Power! If you're fan of classic rock, you should know these songs by legendary Canadian rock band Triumph by heart.

Former Triumph guitarist Rik Emmett signed with Mascot Label Group a few months ago, and it's time to reveal his new band and his new album. The members of RESolution9 are from Rik’s touring quartet: Dave Dunlop on guitar, Steve Skingley on bass, and Paul DeLong on drums, with Dave and Steve co-producing the project.

The first new track "Human Race", featuring a guest appearance by Rush guitarist Alex Lifeson, will premiere in in less then two weeks. Keep an eye out on mascotlabelgroup.com, or follow us on Facebook or Twitter.

RES9 is available to pre-order on CD, black and red vinyl. The red vinyl is limited to only 300 copies worldwide, and available exclusively on the MLG webstore. These will sell out quickly, so act fast!

The members of RESolution9 are from Rik's touring quartet: Dave Dunlop on guitar, Steve Skingley on bass, and Paul DeLong on drums, with Dave and Steve co-producing the project. Much of the album was recorded and mixed at Mississauga's famed MetalWorks Studios, where Rik enjoyed a profoundly comfortable re-connectivity to his own roots.

Limited edition of 300 copies on red vinyl. Available exclusively on the MLG store!

Please note that this is a pre-order item. If you order this item together with an item that is already available, we will hold your order and ship all items at once. We recommend that you place a separate order if you wish to receive the released items sooner.
##Rik Emmett & RESolution 9 - RES9 - Album Trailer