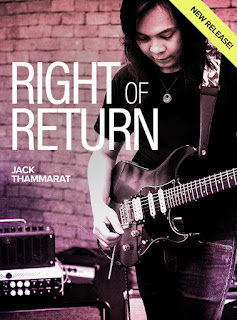 Pick Up Your Guitar, Crank The Speakers And Jam Like Jack!

When Jack Thammarat rocks up with a brand new track everyone instantly stops to listen, while the guitar playing enthusiast asks us for the official TAB/notation! Good news, as Jack is back and once again shows what an incredible songwriter he is with his brand new release titled 'Right Of Return' and we have all the tools you need to learn it!

This is a rollercoaster of a track featuring some really amazing guitar lines and some of the prime cuts from Jack's phrasing. Seriously, have a listen to the solo sections in the video, we haven't heard phrasing as fresh as this in a long time!

Right from the intro piano piece through to the final guitar note, this track summarises Jack's compositional skills completely. You are instantly drawn in, encapsulated by the musicianship, the melodies, playing and backing track. You instantly want to pick up your guitar and join in, learn a few sections and delve into Jacks brain to understand his thoughts as he composed it. That's where JTC steps in and provides you with everything you're going to need to get jamming and playing just like Jack!

Downloading this release will provide you with the full playthrough of the track in both video and audio format, as well as the official transcriptions in TAB and Notation and the official backing track. If you are a premium member then just hit that +MyTracks button to instantly get streaming access to it all.