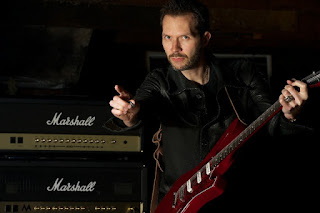 Paul's been incredibly busy! He just finished a European tour where he played shows in Israel, Germany, The Netherlands, and dozens of places in between. He's been playing songs from his new album titled "I CAN DESTROY" which came out last May and is available now. If you missed him don't worry, he's coming back to the US and playing shows from California to New York starting in January. His next show is January 19th, 2017 at "Whisky A Go Go" in West Hollywood, CA. Even with his busy touring schedule Paul still finds time to respond to Video Exchanges® from his students.

Who is Paul Gilbert?

Rock guitarist Paul Gilbert was born in Illinois and raised in rural Pennsylvania. Paul was first inspired by his uncle Jimi Kidd and started to learn guitar at the young age of 5. By the time he was 15, Paul was performing in clubs with his band Tau Zero, and was also featured in the February 1983 issue of Guitar Player magazine.

When he was 17, Paul moved to Los Angeles to study guitar at the Guitar Institute of Technology (GIT). After graduation, Paul joined the faculty as a guitar teacher and also began recording with the group Black Sheep. He later formed the band Racer X, who released their debut album Street Lethal in 1986.

In 1988 he began playing guitar with the Grammy® nominated group Mr. Big. Aside from his signature rock guitar shredding, Paul Gilbert is known for his enthusiasm, and being an approachable and highly effective guitar instructor.

What will you learn in his school?

Paul Gilbert has taken his entire knowledge of playing guitar and poured it into a comprehensive video library that includes hundreds of incredible rock guitar lessons. These lessons will take you from beginner all the way to expert - and there's truly something for everyone. You’ll start with basic chords and tuning, and then progress into advanced string skipping and solos.

What ultimately sets these online lessons apart from other offerings however, is the ability to submit a video for personalized feedback using the ArtistWorks Video Exchange® learning platform. Paul reviews each submission and records a video response, offering tips about how to improve.

Paul's a truly unbelievable teacher and fully committed to his students. But don’t just take our word for it, get to know Paul personally through our Video Exchanges®.Yes, Paul Gilbert himself will respond to you!

Join today with Paul, or any of our other celebrated teachers and receive 15% off any subscription size, just use the code PRO15 at checkout.