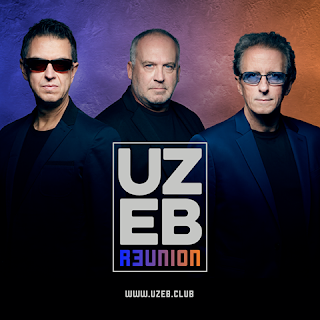 UZEB: Here are 4 letters and a sound that still resonates in the audience’s ears since their inception in 1976 and throughout the 80s. They gave their last farewell concert at the height of their popularity at the Montreal Jazz Festival in an outdoor concert in front of a crowd of 96,000 in 1992. UZEB had now secured their spot amongst the greats.


A few months ago, guitarist Michel Cusson, bassist Alain Caron and drummer Paul Brochu casually met for a friendly get-together. As they spoke they quickly recognized that the musical spark that had set them off 40 years ago was still intact. They quickly found themselves in a rehearsal studio going through their material: UZEB WAS BACK !

UZEB was considered to be one of the first Jazz Fusion groups in the world; one of the most popular and respected of the genre with over 500,000 albums sold and over 1000 concerts worldwide. Critics often noted that their innovative sound design was ahead of its time and their absolute musical mastery propelled the group to the forefront of the Jazz fusion landscape in the eighties.

Thought out its career, UZEB won nine ADISQ awards including Group of the Year in 1984 and 1989. They were also awarded the Oscar Peterson Lifetime Achievement Award by the Montreal Jazz Festival in 1991.

Today Michel, Alain and Paul have reunited to offer once again the highest-level of musical performance and wizardry that made them famous in their heyday. The UZEB: R3UNION Tour will highlight music from their ten albums as well as brand new material, while modernizing the state-of-the-art sound that defines them and sets them apart.

This is a unique opportunity for all, from die-hard fans who followed the group to those who dreamed of seeing them light up the stage one more time, because UZEB IS BACK !