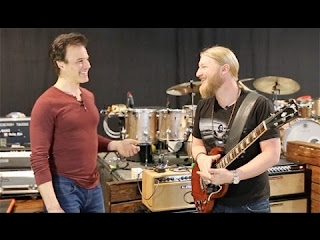 PG’s John Bohlinger caught up Derek Trucks, Susan Tedeschi, and Tim Lefebvre of the Tedeschi Trucks Band before their 3-show residency at the Ryman in Nashville. While this might not be a gear-heavy band, there’s plenty of soul, groove, and vibe.

Derek Trucks is not one to switch guitars. A longtime SG man, his current No. 1 is a prototype of a 2013 Gibson Dickey Betts signature custom shop SG—but with actual vintage PAF pickups. Trucks keeps a similar SG as a backup, but only plays it when he breaks a string, and then he usually switches back as soon as the string has been replaced.

Susan Tedeschi’s No. 1 is a stock 1970 Stratocaster that was a gift from Derek after he inquired about what her dream guitar would be. She keeps it strung up with D’Addario (.011–.049) strings.

Tim brings a pair of basses on the road with Tedeschi Trucks. Here is his custom CallowHill bass nicknamed the “asshole bass” by the late luthier Tim Cloonan. Hidden underneath the pickguard is a sopabar pickup that can be mixed in.