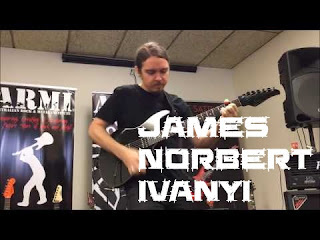 "The Matter Circumvention" filmed at "Shred O'Clock- An Exclusive Australian Masterclass with guitarist James Norbert Ivanyi".
Saturday 25th March 2017 11am in Adelaide at ARMI
James Norbert Ivanyi is a multi-instrumentalist, producer and musician hailing from Sydney, Australia. He performed and toured with a diverse range of musicians and bands for many years before going solo in 2013 and has since released three internationally acclaimed instrumental albums "Aphasia", "The Matter Circumvention" and “The Usurper” – and is currently working on a follow up EP due for release in 2017! He is considered by his fans, peers and industry to be one of the most original, commanding and versatile young guitarist on the scene today. His unique style of technical modern metal fused with the classic sounds of 1960’s and 1970’s progressive rock music have seen his fan base transcend generations and genres.
He has been invited to perform several times in the United States at the Suhr Factory NAMM party, has recently been touring in Australia in support of “The Usurper” and was a part of the first annual "The Guitar Collective 2017" showcase in Los Angeles alongside Dan Sugarman, Nili Brosh, Yvette Young, Felix Martin and Angel Vivaldi.
James is endorsed by Suhr Guitars, Friedman Amplification, Fractal Audio, Diamond Pedals, D'addario Strings and Planet Waves and Swiss Picks.
Masterclass Proudly Sponsored by
The Sound Garage
Suhr Guitars, D'Addario, Friedman Amplification, Fractal Audio Systems, Swiss Picks and Diamond Guitar Pedals
James Norbet Ivanyi:
https://www.facebook.com/jamesnorbert...https://jamesnorbertivanyi.bandcamp.com/jamesnorbertivanyi@gmail.com
ARMI Australian Rock & Metal institute:
http://www.armiofficial.com/https://www.facebook.com/ARMIofficial/