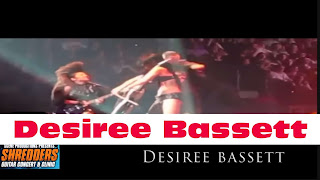 Desiree' Apolonio Bassett
Desiree has played on stage with many legends in her young life including Sammy Hagar, Ted Nugent, Marshall Tucker, Foghat,Living Colour, Boston and more and has toured in USA and beyond as guitarist for Michael Jackson IMMORTAL world tour by Cirque du Soleil. Talented and you can see the love and passion she has for guitar every time she plays.

Joey Concepcion
Joey has been impressing people all over the world for years, you may have seen or heard him play with Mike Vescera(ex Yngwie Malmsteen vocalist), The Abscence, Dead by Wednesday, Armageddon(featuring ex Arch Enemy Guitarist Christopher Amott), or touring with Jasta and Kobra and the Lotus. He recently released a phenomenal solo album available on Amazon. He is endorsed by Jackson guitars and more...

Mike Kerr
Guitarist of Firstbourne and Mike Kerr group, Mike has taken his unbelievable tone and melodic guitar style to the stage here in USA and abroad. Endorsed by several companies with his own signature products.

Jack Kosto
Jack Kosto shreds with the best of them and is best known for his work in his band Seven Spires who have an increasingly large fan base worldwide with the release of their latest full length album Solveig. An artist to watch for sure.

Tickets will be available soon for $10 in advance thru Scene productions, The Music Place/Groton Guitars in Groton and Altones.

My Video was taken from our FirstBourne Live at the International Portuguese Music Awards. Thank you IPMA for the video!