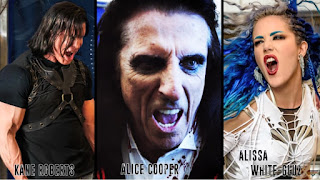 Follow the "Newest From Frontiers" playlist on Spotify to keep up with all the new songs we release each week: http://spoti.fi/1rQz5Zm

Kane Roberts is back with a new solo album, “The New Normal”, which will be released on January 25, 2019.

Kane has involved some really amazing friends in the making of “The New Normal, including Alice Cooper, Alissa White-Gluz of Arch Enemy, Nita Strauss, Babymetal drummer Aoyama Hideki, Kip Winger, Paul Taylor, and Ken Mary. Three years in the making, “The New Normal” melds the old and new in metal for a truly outstanding album.

“My music has evolved over the years, even though I was out of the spotlight. Stepping into this new project, there are new styles and sounds evident, but I haven’t made some false effort to distance myself from the past. People will notice a blend of influences from classic rock and metal to the hot bands that are emerging more recently,” says Roberts.

He continues, “Zeppelin to Volbeat to Arch Enemy…they’re all bringing crushing energy to rock/metal while creating truly awesome music. I was lucky to have found Frontiers because they allowed me three years to make this album and sort through my truest feelings and vocal/guitar skills to create something meaningful to me. There is a real concern for preserving the creative process at Frontiers and to my way of thinking there’s no better place for me right now”