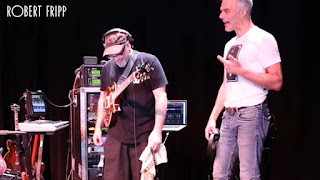 The original prog-rock guitar hero goes head-first into the 21st century with a tubeless setup that is heavy on digital effects, MIDI switching, and ultimate control.

Although Fripp and King Crimson will forever be known for pioneering the prog-rock movement with 1969’s In the Court of the Crimson King, his innovation on guitar technology and craft is staggering. His collaborations with Brian Eno, David Bowie, and Andy Summers are highlights of a solo career nearing 50 years. John Bohlinger went to Nashville’s Ryman Auditorium to get the details from Biff Blumfumgagnge, Fripp’s main road tech since 2005. Blumfumgagnge demoed Fripp’s gear and explained the engineering behind the alchemy.