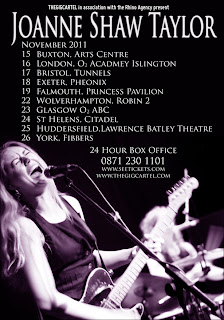 Born and raised in the Midlands, Joanne was first discovered as a 16-year-old guitar prodigy by Dave Stewart (Eurhythmics). She’s fast becoming the hottest young female guitarist on the British Blues scene. On tour in the UK in November by popular demand, Joanne will perform songs from her debut album ‘White Sugar’, and 2010’s follow-up ‘Diamonds in the Dirt’.