Ron Jarzombek: Halloween... he's behind you! 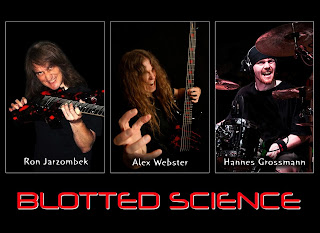 NOTE: For those of you who want to view the video to match up to 'Vermicular Asphyxiation' on big screen at home, here's how to sync it up: Pull up the 'Slither' DVD and when the time code hits 49:11, start the Blotted Science recording of 'Vermicular Asphyxiation'. You'll know that it is perfectly synced if when the faucet appears (at 49:19), it is EXACTLY when the Abmaj7 chord is hit.

Commented Ron Jarzombek: "OK, all you ghouls and goblins out there - here is our little contribution to the Halloween festivities. No giant spiders and nasty worms battling heroic humans in a primordial pit of death this time around, just a clandestine home invasion of the slitherin' kind.  If you decide to stay in from the trick or treating tonight, be sure to lock your windows and shut your mouth. You never know what may be trying to get in.” 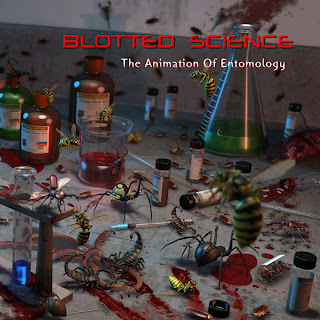 The folllow-up to the band's highly acclaimed 2007 "The Machinations Of Dementia" full-length album was produced and mixed by Ron Jarzombek and recorded in San Antonio, Texas; Tampa, Florida; and V. Santura's (OBSCURA, TRIPTYKON) Woodshed Studios in Landshut, Germany where the drums were cut. Mastering duties were once again handled by Jacob Hansen (VOLBEAT, DESTRUCTION) at Hansen Studios in Ribe, Denmark.

Released on Jarzombek's EclecticElectric label in most territories, "The Animation Of Entomology" will get a European release through UK-based Basick Records onNovember 28.  Commented Ron Jarzombek: "I'm really excited to be partnering with Barley and the Basick Records crew on the new BLOTTED SCIENCE record, 'The Animation of Entomology'. They are a young, exciting company on the cutting edge, whose roster is very much compatible with what BLOTTED SCIENCE is all about, so I feel like this will be a great home for us. Feeding 'The Animation Of Entomology' into their distribution channels should noticeably improve our retail visibility and availability compared to'The Machinations Of Dementia'. I'm looking forward to working with Basick and maximizing our potential to the fullest in Europe!"

Added Basick label owner Barley: "Having been a huge admirer of Ron's output for a number of years, it gives me great pleasure to welcome BLOTTED SCIENCE to the family! I can’t wait to get this record out to all our dedicated fans in Europe!"