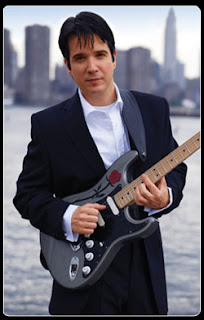 Guitar virtuoso Gil Parris shines in many musical idioms. After attending Berklee School of Music on a Jazz Masters scholarship, he was discovered in 1990 by Mike Varney and featured in Guitar Player’s “Spotlight” column. Since, he has gone on to play on over two-dozen national records and countless others with players like David Sanborn, Bob James, Will Lee, Eric Alexander and Bob Malach.

Some of the highlights in his side-man discography are: “Syndicate of Soul” (on Shanachie Records with Dr. John, Wilbur Bascomb, and Corey Glover), “Bluesiana Hurricane” (with Chuck Rainey, Bill Doggett and Lester Bowie), “Skallelujah” (with the Uptown Horns), Toko Furuuchi’s “Strength” (for SONY/Japan with an all-star cast of New York studio players), and Bakhiti Kumalo’s solo CD (Paul Simon’s bassist).

Gil’s playing is influenced by sax, pedal steel and piano players, which gives him a fresh, unique style. Of his sound, Vintage Guitar writes, “a dazzling mix of jazz, funk and even country…Parris’ playing is so hot it avoids any clichés from those styles.” His creative solo arrangement of “Pop Goes the Weasel,” featured in the compilation, “Public Domain” garnered him a Grammy nomination in 2001 for Best Folk CD.

Gil is one of very few artists that have nationally released albums in over four different genres: R&B, smooth jazz, traditional jazz and blues. He has solo albums on RCA/BMG (”Gil Parris shines through as the brightest star in the genre since Larry Carlton” -Guitar One Magazine), Okra-Tone/Koch (”Parris has the goods and all seven cuts here show it” -Vintage Guitar), and his own “Jam This” release (”When it comes to improvising epic, crowd-pleasing solos in an eclectic range of styles, Parris is more than qualified to deliver the goods” -Guitar Player). Look for his live blues album released by CMG Records in 2005.

Gil’s first artist-driven Hot Licks video, “Modern Blues Guitar” has been a bestseller for over three years, and he is part of their national video, “Masters of the Stratocaster.” In addition, Gil was the lead guitarist for the seminal jazz/rock band Blood, Sweat & Tears, playing to thousands, and appears extensively on their Christmas album (2003). He appeared on NBC’s The Today Show with rising sax star David Mann and followed with sold out performances at Catalina Island’s Jazz Trax Festival and Berks Jazz Festival, among others.

Gil can be seen performing in New York City and beyond with the Metropolitan area’s top musicians. He has headlined performances at many prestigious New York venues, including B.B. King Blues Club in Times Square, Town Hall, Metropolitan Café, Smoke and 55 Bar. Look for Gil on the road as a solo artist on his calendar at: www.gilparris.com