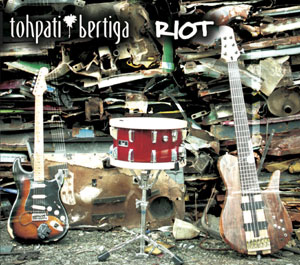 World-class Indonesian guitarist Tohpati reveals further sides of his diverse musical palette with the debut from his power trio, Tohpati Bertiga. Riot frequently puts the rockier side of Tohpati's style on display (and in full force!) on this scorching fusion shredfest.SpacerVenturing far into uncharted territory, Bertiga covers ground where few trios would dare tread -- much less in a live performance. All new compositions from Tohpati test the mettle of this trio, and they are most certainly up to the task. Augmented by imaginative melodies, twisting changes, superb soloing and driving, relentless rhythms, this album is a tour-de-force of modern fusion shredding at its most creative.SpacerWith his gifted playing taking center stage, Tohpati places yet more dimensions of his accomplished guitar stylings on display. Showing that he is just as "at home" with rock and even funk settings as he is with jazz and fusion, this album further cements his rightful place among the highest echelon of today's guitar giants.SpacerRecorded live in sparkling studio-quality fidelity, Riot is a fine addition to Tohpati's already impressive resume.