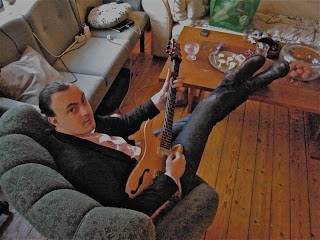 All music recorded and programmed by me. http://www.facebook.com/carlmornerrin...

From arena-rock anthems like "So Who Votes In Favor Of The Heliocentric Theory?" to 80's synthesizer-laden tracks like "More Stick Than Carrot" via drum'n'bass inspired grooves in "Champagne Wishes And Caviar Dreams" and contemporary world jazz fusion in "The Cause". This album is a treat for fans of great songwriting, intense guitar playing and beautiful sounds and production.

Neocolony is Carl Mörner Ringström's first outing as a solo artist, after being active on the music scenes in Sweden and Denmark and playing around the world for over ten years. Carl has been heard playing in as diverse genres as balkan folk music, hiphop, straight ahead jazz, fusion, death metal and improvising over Steve Reich's music with an orchestra. All these influences have fused into one distinct, very personal sound with no boundaries of genre or style and with 100% energy and output.