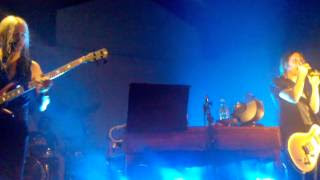 As performed live at Mr. Smalls in Pittsburgh on April 30, 2012, Steven Wilson's band performs part of their song "Luminol" in the style of the 1960s band The Shaggs as part of the encore. 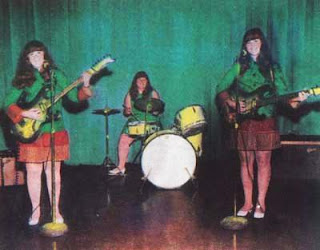 The Shaggs were formed by Dot, Betty and Helen in 1968, on the insistence of their father, Austin Wiggin, who believed that his mother foresaw the band's rise to stardom. The band's only studio album, Philosophy of the World, was released in 1969. The album failed to garner attention, though the band continued to exist as a locally popular live act. The Shaggs disbanded in 1975 after the death of Austin.

The band is primarily notable today for their perceived ineptitude at playing conventional rock music; the band was described in one Rolling Stone article as "...sounding like lobotomized Trapp Family singers."
http://en.wikipedia.org/wiki/The_Shaggs


Steven Wilson - Luminol ala The Shaggs

The Shaggs "My Pal Foot Foot"