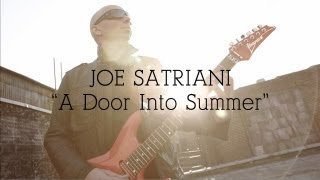 In this revealing interview at the legendary Skywalker Studios, Joe Satriani discusses his inspiration behind the writing and recording of his new album "Unstoppable Momentum" (May 7, 2013). Also included with Joe's interview are exclusive behind the scenes footage of the recording sessions and samples of tracks from the album.

"This is what I do, it's what I've always wanted to do ... in service of achieving that never finishing artistic quest -- that's what it is and what it's all about" said Joe.

More to be revealed in the 3-part mini documentary of the Unstoppable Momentum recording sessions! Coming soon, this expanded double-length version has Joe going into greater detail and depth about the album and working with Mike Keneally (keyboards), Vinnie Colaiuta (drums), Chris Chaney (bass), and co-producer/engineer Mike Fraser.

Only a few more bundles are available at http://www.satriani.com/ before tomorrow's album release!!!!

Joe Reveals the Unstoppable Momentum Behind His Artistic Quest


Joe Satriani: "A Door Into Summer" (from new album UNSTOPPABLE MOMENTUM available May 7)