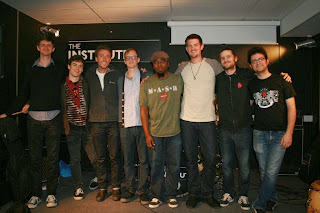 This year’s Grammy Awards may be remembered as the year of the raunchy Beyonce performance or the year that French duo Daft Punk won big, but it was also the year that an independent London music school saw major success with a tutor and former student both winning one of these prestigious awards.

The Institute of Contemporary Music Performance is a modern music school in North West London that prides itself on the quality of its teaching faculty, all of whom are also actively engaged in today’s music industry. Bill Laurance, a degree tutor at the Institute, and Michael League, a visiting tutor, are both founding members of the Brooklyn-based contemporary jazz band Snarky Puppy which received the ‘Best R’n’B Performance’ Grammy award for their version of ‘Something’ featuring Lalah Hathaway which appears on their latest album “Family Dinner – Volume 1”.

The ceremony also saw former Institute vocal student Foxes win in the ‘Best Dance Recording’ category for her vocals on dance artist Zedd’s track, ‘Clarity’, beating heavy competition from Calvin Harris and Armin Van Buuren. ‘Clarity’ has sold over 2.5 million copies in the US alone and Foxes has received attention on this side of the Atlantic too with her solo singles ‘Youth’ and ‘Let Go for Tonight’.

These big wins came exactly one week after another Institute alumni made it to Number One in the UK charts. Electro band ‘Clean Bandit’ which includes Institute drum alumnus Luke Patterson made it to the top of the charts with their hit ‘Rather Be’, their second single to make into the top twenty straight after release.
news