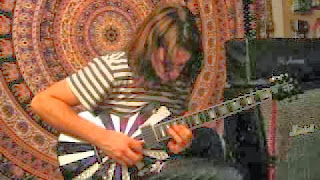 I first met PJ d'Atri in San Francisco, whilst we were watching Greg Howe rehearse for the Jason Becker Not Dead Yet show. He had built his own guitar... it's clear from these latest set of videos that he's certainly reached a higher level of playing technique.