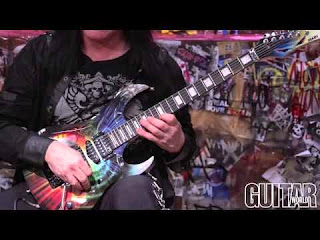 For tabs of this lesson, go to : http://www.guitarworld.com/time-burn-...

Hello again, Guitar World readers. It’s nice to be back! I’d like to begin this new series of columns by talking about getting started with sweep picking, which is a very useful and exciting technique that I often use to perform fast arpeggio-based licks and runs.

Let’s get started with the basic mechanics of sweep picking, and then I’ll move on to more complex applications of the technique.

An arpeggio is the notes of a chord played individually and in succession. In FIGURE 1, I’m fretting a first-position Am chord and, starting on the open A string, picking each note one at a time, moving to the first string and then back down to the fifth string. The idea is that the notes of the chord are played melodically, as opposed to being strummed together.

Sweep picking entails dragging the pick across several adjacent strings in a single stroke, either moving from low to high, or from high to low, which is often called a “reverse sweep.”

The technique allows a guitarist to perform what I think of as keyboard-style runs, as long, extended-range arpeggios played up and down a keyboard are typically featured in classical piano pieces. When I was first learning this technique, I often heard it referred to as raking, as the movement is not unlike pulling a rake along the ground in one unbroken movement and direction.

In FIGURE 2, I fret a fifth-position Am barre chord and initially sound each note in succession from low to high by dragging the pick in a single downward motion across all six strings. After the high E string is sounded, I then reverse the process and drag the pick in a single upward motion across all six strings, moving from the highest to the lowest. Notice also that I’m using a slight amount of palm muting, as this helps shorten the decay of each note after it is picked, making each individual note sound distinct and clear and not part of a strummed chord.

The next step is to expand upon this idea by incorporating hammer-ons and pull-offs into the shape, as demonstrated in FIGURE 3. While still fretting the Am barre chord, I strike the low A note and then hammer-on with my pinkie to C at the eighth fret. At the top of the shape, I use the pinkie again to fret a high C note at the eighth fret on the high E string, then pull-off back to A and descend across the lower five strings.

Now that you understand the concept, let me show you how most sweep-picked licks are typically played. As illustrated in FIGURE 4, I’ve moved the first-position A minor shape up 12 frets, to 12th position, and the idea here is not to barre across any strings but rather to “get off of” each note after it is picked and move quickly from one string to the next, fretting and then releasing the finger pressure so that each note will sound by itself, without the previous note ringing, or “bleeding,” into it. Fret-hand muting is key here.

We can move the idea down to another position, as demonstrated in FIGURES 5–8. FIGURES 5 and 6 present the basic idea, and FIGURE 7 shows how I would play the lick repeatedly in a continuous loop. FIGURE 8 offers a slight twist, in that the lowest and highest notes are sounded twice. Play through all of these shapes slowly and then gradually increase the tempo.
Michael Angelo Batio - Sweep Picking 101