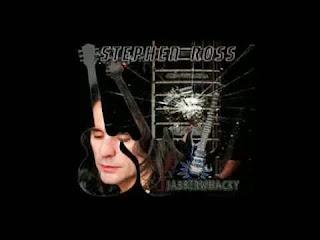 One of Shrapnel Records earliest discoveries is back with a new album, Jabberwhacky, a stunning collection of well-arranged compositions laden with colorful chord changes, heavy grooves and melodic lines. Sure, Stephen’s playing is technical, but his technique never gets in the way of the music.

Stephen was first discovered by Mike Varney in 1991 and released his debut CD called Midnight Drive on Mike’s popular Shrapnel Label. He has also appeared on Thrills, the second release from Escape Records recording artist Silent Witness, the debut release Leave the World Alone from the band Rogosonic and appeared on numerous compilation releases. He is also the author of the best-selling book Arpeggios for the Modern Guitarist published by Hal Leonard.

Listen to Algorhythms from Jabberwacky:


So climb on board and prepare yourself for a musical joyride that will defy the boundaries of space and time. Jabberwhacky can be pre-ordered now from his online store at http://www.stephenross.com. The official release date is set for May 15, 2015.

If you would like more information on this exciting musician you can visit his website at http://www.stephenross.com. His website has video performances, a discography, up-coming events and an online store where you can purchase his new album Jabberwhacky and other products.